wood, kaolin, pyro accents,
The post is carved with a seated figure holding royal regalia, calabash and drinking horn and whose high rank is emphasised by the distinctive crescent-shaped headdress. She is surmounted by a crouching figure holding a rifle, who in turn is surmounted by a leopard. A human head and spider are carved on the left side. The base shows chameleon and a coilded serpent in low relief.

The figure is surrounded by symbols from the complex iconography of the grasslands. The spider, for example, is a royal symbol connoting wisdom and prescience, while the leopard plays a particularly prominent role; it is considered the alter-ego of the king and embodies power and the claim to rule.

This carving of outstanding quality may once have been placed in a royal palace and probably served to hold a calabash or other royal appendage.

The work was offered at Christie's in London in 1989. The catalogue points out the similarity of the central figure to a royal commemorative figure collected by Captain Hans Glaunig around 1900 in Bangu, northwest of Bangangte, which entered the holdings of the Ethnological Museum Berlin in 1906 (Krieger I, 1978, Pl. 117 / AHDRC 0010843). Fagg sees great similarities in the treatment of the figures with their distinctive headdresses. Both works could come from the same Bamileke workshop from the Batíe-Bangangte region.

Comparison may also be made with a royal throne with commemorative figure collected by Gnügge in Banka and acquired by the Ethnological Museum Berlin in 1909 (Krieger III, 1969, Pl. 13 / AHDRC 0009782). Homberger remarks on this object "the throne collected in Banka in the southern Bafang region is formally strongly reminiscent of Bamileke workshops of the Batíe region" (Homberger, 2008, cat. 100). He depicts the throne together with the Glaunig figure on a double page and thus also relates the two works (Homberger, 2008, cat.101). 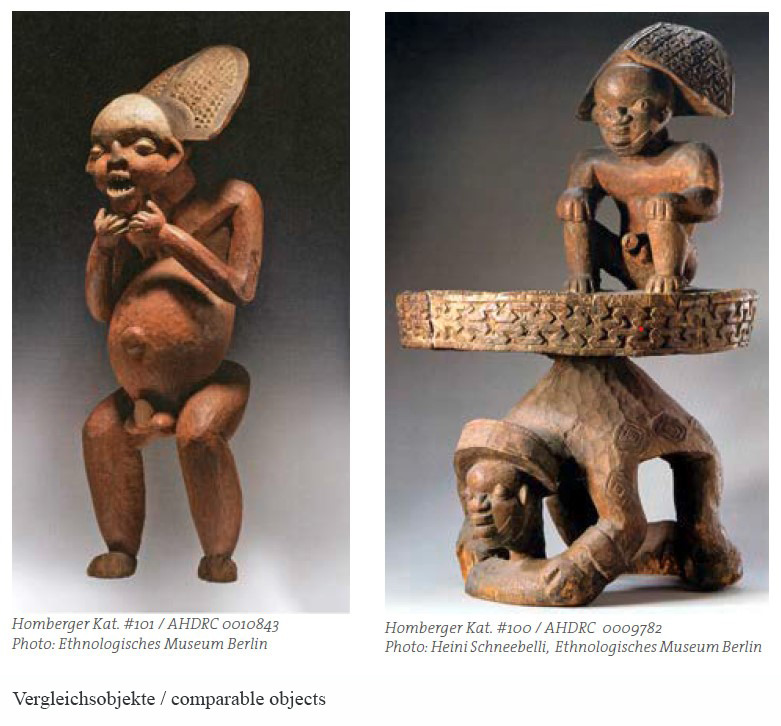