Rare female figure of the Bemba

Rare female figure of the Bemba

It is assumed that the Bemba originally came from Maniema in the north. They probably migrated before the 17th century to their present homeland in south-eastern Congo on the shores of Lakes Mweru and Tanganyika and into neighbouring Zambia, where most of the ethnic group now lives around the town of Kasama.

First with the Lunda and after the mid-19th century in alliance with the slave trader Msiri, they succeeded in building a large empire. Constant disputes with the competing Nyamwezi- Arab alliance and later the abolition of the slave trade led to their decline, which was sealed by their fragmentation in the course of colonial resettlement policies in the 20th century.

The art of the Bemba is very similar to that of their neighbours, the Tabwa and Rungu, who like them live in the border area between Congo and Zambia. Furthermore, a strong influence of the Luba and a certain kinship with the Fipa and Nyamwezi can be detected.

Due to these cultural interconnections and their fragmentation Bemba art is elusive today and little is known about it.

This figure is probably a female ancestor figure, probably a clan mother. The emaciated breasts refer to an older woman who has already given life to many children. Ancestor figures were in the possession of the clan leaders and were symbols of their authority by lineage. Protection and care of the ancestors were guaranteed by the "bushumbu" society. Ancestors were viewed as guardians of fertility and healing; they also watched over descendants and were able to cause misfortune when "bushumbu" responsiblities were neglected.

Geometric scarifications on the belly and back of this figure indicate her rank and status. According to Felix, the facial scarification running in a line from the mouth to the ears is characteristic of older Bemba figures from the 19th century (Felix, 1987, p. 8).

Further research led us to a male figure from the Jay C. Leff collection (1925-2000), which was auctioned as lot 42 at Sotheby Parke Bernet in 1975 (cf. AHDRC 0042394). Great stylistic similarities with the present female figure suggest that both works originate from one hand and were possibly once created as a pair of figures.

According to current knowledge, the figures can be assigned to the Bemba, although stylistically they are very close to the art of the neighbouring Tabwa and the male figure was also assigned to the "Batabwa" in 1975.

They can be dated to the 19th century, and thus to the heyday of the once powerful empire on Lake Tanganyika. 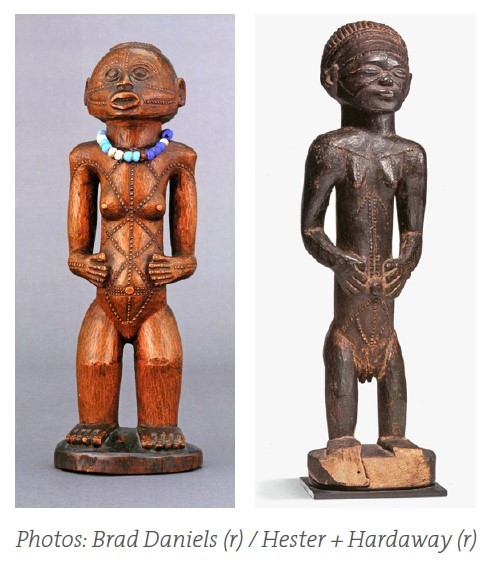 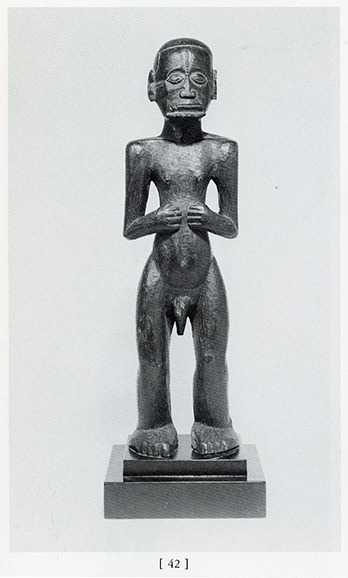