The catalogue for the 85 Tribal Art Auction on March 4, 2017 is now available. Telephone bidding support also in French !

The catalogue for the Tribal Art auction on March 4, 2017 is now available online as well as in print version. More than 500 classic, traditional and unusual art objects from Africa, Asia, Australia and the South Sea are on offer.

Among the highlights: the 'kpan' mask from the Baule people, carved before 1920, formerly owned by Edith Hafter, Solothurn, Switzerland (Los 174). Nine more art works are coming from the same collection, such as the rare Dida figure (Lot 188) , an extraordinary, extremely rare and superbly worked talisman from the Admiralty Islands (Lot 44), as well as the Baule figure pair (Loz 167), dated around 1900 .

Collections, and the stories they have to tell, have their special appeal, especially when an outsider and art lover is given a more in-depth insight into the collection. Right this is applied to the Hans D. Rielau collection (part I was auctioned excactly one year ago, see the 82nd Tribal Art Auction on February 27, 2016).

The second part of the Rielau collection also shows what the Rielau collection has to offer. Small special collections within a collection with the aim of representing a favourised basic type in a broad and varied manner. This is the case with the delicately carved ‚lukwakango‘ masks of the Lega (Lots 66-69), the ‚venavi‘-figurine and‘ kakudji‘-miniatures (Lots 71,72). This is also impressively demonstrated by the small group of ‚maternité‘ figures (lots 80-86). Created by artists from a wide range of ethnic groups, they have embraced the carrying of a child in a variety of ways with artistic sophistication. 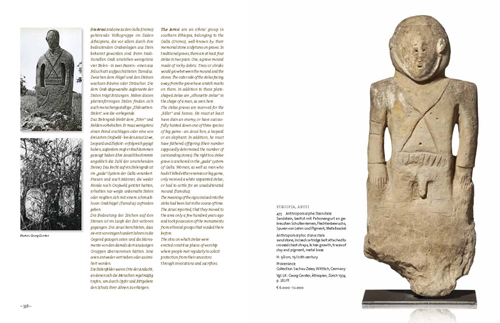 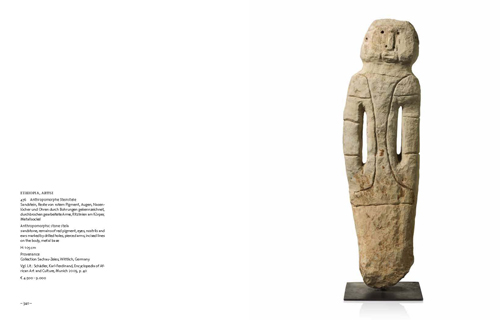 The Ethiopian collection of Sachau-Zeies (Lots 470 -486) is a mirror of  the various cultural styles of areas influenced by the Middle East. Ethiopia is the the most populous land locked country in the world with more than 80 ethnic groups, ranging in size from several million to a few hundred. Nowhere else on the earth are so many different ethnic groups gathered as densely as here. As is the rule: a place, a tribe, a king. Ethiopia is a geographically a sub-Saharan Africa region, the country‘s historical and cultural development is heavily influenced by the Middle East: the Aksumite Empire, Coptic-Christian North, Harar and the Muslim East, as well as the unspoilt cultures of the South and West.
A small mirror can be found in this Ethiopian collection of Sachau-Zeies. A work of entirely contrasting cultural regions. Cultural regions, which could also develop in such a way, because Ethiopia itself was never really a colony, despite colonial influence in neighbouring countries.
Some of these works are now at home in the Ikonenmuseum Recklinghausen (Museum of Ikons), as well as in the USA at the Houston Museum of Natural Science and the F. Johnson Museum of Art at Cornell University in Ithaca, New York.
Objects from the present selection, such as the masterly made ikon from the 17th century (lot 470) and the Konso Stele (lot 478), were shown at the travelling exhibition »Lucy‘s Legacy: The Hidden Treasure of Ethiopia« (Houston, Seattle, New York, 2007/2008). 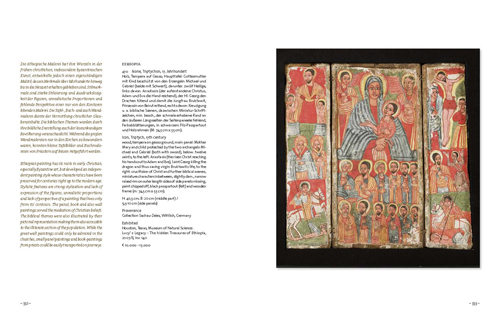 Africa‘s tradition and modernity: The art collection of Marlies Sachau-Zeies and Klaus Sachau unites both. Klaus Sachau worked for almost 25 years, from 1981 to 2004, for various development organizations in Asia and Africa, five of which were in Ethiopia. 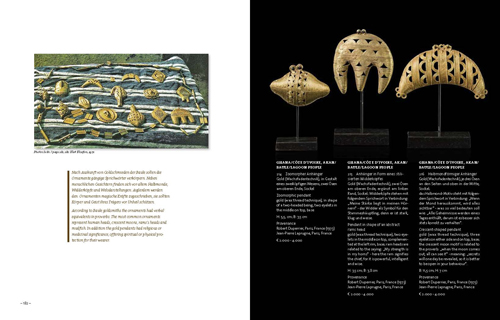 Other focal points on offer are masks and sculptures of Gabon's cultural regions, an important collection of gold jewels from the Akan / Baule (Lots 214 - 227). Among the Baule and certain neighbouring Akan groups, gold jewellery indicates wealth and status. If a man was certain that his self-acquired gold ornaments were sufficient in number and quality, he provided a feast where his wealth was laid out for the community to see. Thus he established his status as „big man". The participants are dressed in their finest cloth and wear some of the most stunning of the ornaments. According to Baule goldsmiths the ornaments had verbal equivalents in proverbs. The most common ornaments represent human heads, crescent moons, rams‘s heads and mudfish. In addition the gold pendants had religious or medicinal significance, offering spiritual or physical protection for their wearer.

Expressive, archaic small sculptures are found in various ethnic groups throughout Cameroon. The most famous among these monumental miniature sculptures are the anthropomorphic „mu po" magic figures from the workshops and the artists of Bamileke / Bangwa culture in the Cameroon Grasslands.

The artistic quality and immediacy of these figures is incomparable in Africa. The brutal, almost primordial power that they radiate has fascinated the collector’s world for decades.

Lots 307-309, 312, 313, 315 are from the collection of the well-known Cameroon expert Dr. Pierre Harter. His research and documentation of the art and culture of Cameroon is formulated in his standard work „Arts anciens du Cameroun" from 1986. Important objects from his collection are today the highlights of Paris museums and belong to the canon of world culture.