The preview starts next week. Insights even now ! 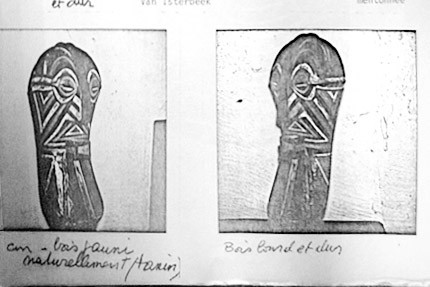 Both drafts showing this mask can be found in former papers from Jean Willy Mestach (compare AHDRC 0030686-004). According to AHDRC this type of masks was often collected between 1900 and 1930.

A work by the same master is illustrated in a feature on Kifwebe maskettes of the Luba and Songe (see Tribal Art Magazine, Spring 2008, p. 111, Fig. 20) and was attributed to the "Lubangule".

The so-called "Lubangule" are a Luba subgroup, who live in the southern part of Kabinda in the province of Katanga, bordering the Luba-Kasai. The works collected in this region exhibit a mixture of Luba and Songe styles and are often referred to as Luba/Songe.

Masks like the present one are called "masque du case" ("hut masks"). They were not danced and therefore had no holes on the rim for costume attachment. They were probably suspended from the ceiling of a hut.

Luba "kifwebe" masks are generally benevolent anti-sorcery masks, used mainly for the purposes of purifying and protecting the community from malevolent spiritual forces by employing the aid of the ancestors.

Take a look at this striking narrow form of the so-called hut masks which were never danced.

Take a look at the showroom
(Photos: Matt Keyworth)