Early contacts and trade relations with the Europeans already in pre-colonial times left unmistakable traces in the culture of the Duala. A strange mixed style emerged. European carpentry techniques and bright paint were adopted, and the iconography became a fusion of traditions and foreign styles.

Some art genres (masks and ancestral figures) fell into dispair, but the decoration of boats flourished, which were no longer used only for fishing but also for transporting goods and as a sign of prestige. Boat parades and regattas took place on festive occasions. At such festivals, the ships were decorated with long, elaborately carved "beaks" ("tange") on the stems - modeled on the figureheads of European merchant ships.

Of the works of Duala coastal culture, some old pieces dating from before the First World War have been preserved. They mainly decorated the boats of kings and their families. The more recent examples made for individual regatta teams widely continue the tradition of these first "tanges" (cf. Kecskési,1999, p. 90).

The present piece shows details that indicate European influence. For example, the heraldic structure of the two elements with lions attached in mirror image, or birds, and ape-like half-figures carrying a crown. Other elements, such as the bird-snake motif, which refers to the struggle between life and death, or light and darkness, are taken from traditional iconography. 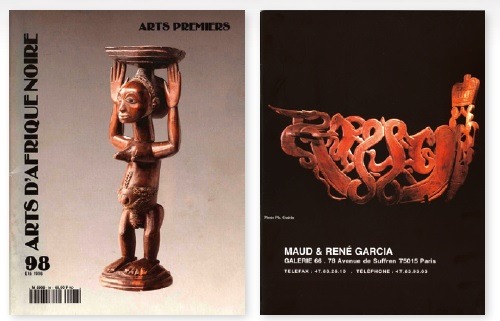