The name Fang (Pangwe or Pahuin) denotes a population of woodland dwellers that is neither linguistically nor culturally uniform, consisting of numerous subgroups, who live in southwestern Cameroon, Equatorial Guinea and in northwestern Gabon.

A common spiritual basis is the very close bond with the ritually venerated ancestors. The bones of particularly revered men and women, especially their skulls, were kept in cylindrical containers made of tree bark. Figures like the present one were attached to the containers with the help of the peg-like extensions. They served as a guardian figure and were supposed to protect the valuable content from unauthorized access. The skull barrel and ancestral figure were kept in holy huts, but often simply in the houses.

According to Tessmann's reports, the guardian figures themselves were of little cultic importance, but certain magical powers were ascribed to them. Most of them hold a carved imitation of an antelope horn filled with magic substances. Kecskési reports that in the eye sockets of some guard figures of the Ngumba area, hidden behind glass, human teeth have been discovered. The guardian figures also served as protective house amulets, which were supposed to keep away the dreaded sorcerers who were prowling everywhere.

Tessmann reported on the use of the "éyéma-o-byéri" at festivities that he was able to attend himself. When a community decided that the time was right then a ceremony ("malan") was held for the ancestors to request their blessings. The young men were also initiated into the cult at this time. For this, the skull was given special treatment a few days before the ceremony. This consisted of smearing it with camwood ("baphia nitida") and the skull was also given offerings of food. The actual ceremony took place behind a screen where a type of puppet show took place with the guardian figures. At the climax of the ceremony the skulls were taken out of the container and placed on banana leaves that were laid on the floor. A village elder then makes various requests of the skull, for example better luck with hunting, better harvests, more children etc. The second day of the ceremony is accompanied by dancing and drumming, animal sacrifices, the mixing of medicines, the anointing of skulls and initiates etc.

Stylistically, the guardian figures show several regional types within the area inhabited by the Fang.

The present figure is stylistically assigned to the Fang-Ngumba in South Cameroon in the region of the Lokoundjé River. Together with four other figures, they can be attributed to a workshop or an artist of this style region due to many similarities. All the figures are likely to have been collected during the German colonial period (1884-1919) and brought to Europe.

The faces with their glazed diamond-shaped eyes and the rectangular shaped mouths with carved teeth, and the two-lobed hairstyles, show a striking similarity. But also the formation of the body and limbs, the elongated cylindrical trunk and the almost square arms. Another thing they have in common is the metal applications on the face and body. 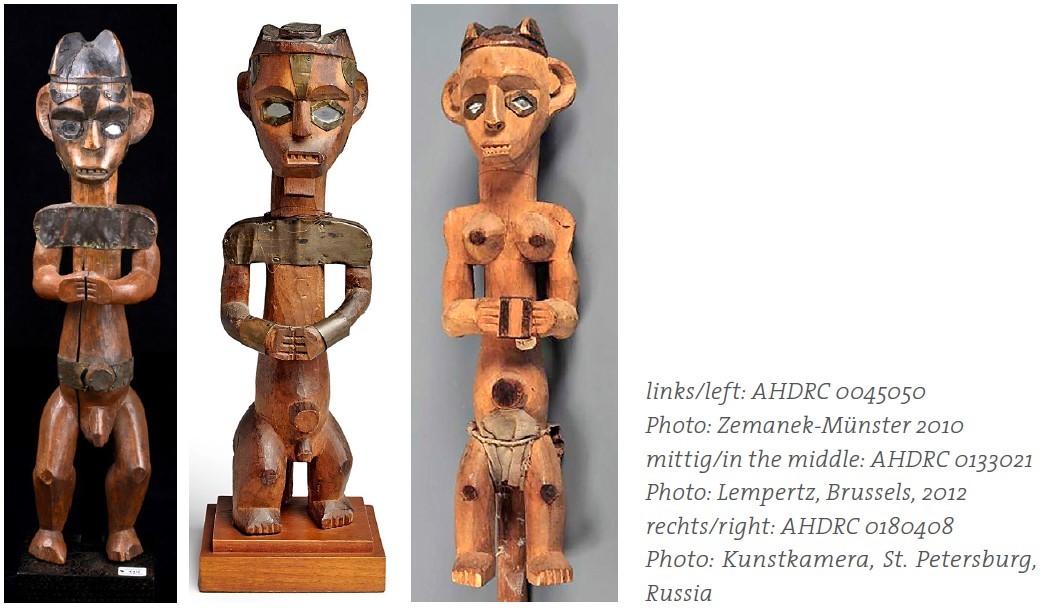